TODAY I MISSED MY MOTHER

Today I missed my mother.

So, maybe you’re asking, does this really merit a blog post?  Well, yes, for me it does. Let’s start with the facts:

My mother died three-and-a-half years ago at almost 94.

We were not close in the usual sense, although, beginning in my adolescence, we did a long and complicated dance that lasted until the brink of her death.

She lived a mile from me during the last 12 years of her life, so we spent a lot of time together and, during her final three or four years, I did a lot of caregiving.

I loved her, and I rarely found a way past the thicket of her defenses, which mostly took the form of offenses.

It pained me to write that last sentence.

Perhaps this seems unremarkable to you - you who are/were able to talk with your moms about things that are/were important to you.  But for me it is always a surprise.  At first, after she passed, I felt mostly exhausted and relieved, and sad for her because of the awfulness of her final months.

And then, every now and again, after days or weeks of barely thinking of her, I started to have these moments.  Moments of sharp missing.

At these times, I ask myself:  Who am I missing?  Is there a body memory of the woman who held me and fed me and read to me during the early pre-memory years?  Certainly, by the time we were interacting in a way I would remember, she had shown herself to be threatened and confused by a separate me, a me who had opportunities that she had never had, and I was struggling to cope with her defenses to genuine and meaningful interaction.  I was learning that talking, for some, is a way of avoiding intimacy.

Sometimes I think I have always been missing my mother.  Sometimes I wish I could have known her as a girl, as a young woman -- before life took its toll.

Before she had to leave school at 14.

Before her city was bombed during WWII.

Before she had to leave her job upon marrying at age 23.

Before my father decided that the family – my mom, my older brother, and I in utero - should move with him across an ocean to Canada, and then to the U.S.

Before she realized she would never see her parents again.

My daughters, who did not carry the baggage with which I was laden, had a different relationship with my mother.  The things she had found threatening in me – my independence, my education – she celebrated in them.  I am happy that they were able to know her in a different way.

Here is an excerpt from something that my daughter Anne wrote shortly after my mother died:

"If she had not been born in Glasgow in the interim of two world
wars; if she had not had to leave school like all girls and most boys
of her social class to become a working member of the family; if she
had not been expected to marry and bear children as her sole
occupation; if she had been of a different time, my gran might have
lived a life not so unlike mine.  She was an extraordinary woman.”

Perhaps Anne, who was able to see the extraordinary in her grandmother, saw my mother more clearly than I.  My mother's life was not what it might have been had she been born a few decades later or been able to choose to stay in school or where and when to work or where to live.  And yet, I can see now in retrospect, that she did the best that she could, or, as her fellow Scots would say, she made a pretty good fist of it.

And so today, I raise a figurative glass to her perseverance. Today I miss her in all of her prickly complexity. 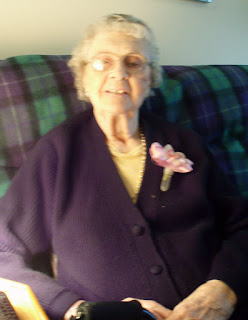 Posted by Marjorie at 1:14:00 PM No comments: Links to this post

Email ThisBlogThis!Share to TwitterShare to FacebookShare to Pinterest
Labels: Glasgow, mother-daughter relationship
Marjorie
I am a recovering attorney, who lives, writes, and gardens in the Pacific NW region of the United States.
Newer Posts Older Posts Home
Subscribe to: Posts (Atom)

PLEASE, GO AWAY (but not too far): CONFESSIONS OF A CLOSET INTROVERT 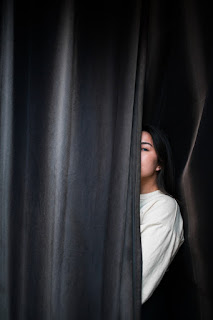 Marjorie
I am a recovering attorney, who lives, writes, and gardens in the Pacific NW region of the United States.

A Woman of a Certain Age